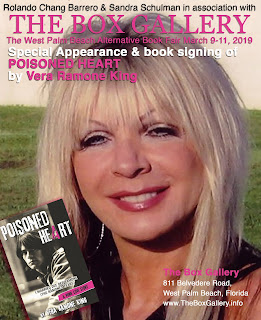 The Box Gallery initiates the first national alternative book fair in West Palm Beach. From coast to coast artists, authors, photographers, and cultural icons of the punk and queer culture come to celebrate the visions of the past and share their visions for the future. From uptown to downtown, high brow to low brow, there will be a series of talks lectures, and presentations that span almost a half of century of documentation beginning from the early 70's to present.
This event is co-organized by Rolando Chang Barrero and Sandra Schulman.

Often regarded as the first punk-rock group ever, named one of Rolling Stone magazine's Top 50 Bands of All Time, with all members having been inducted into the Rock and Roll Hall of Fame, The Ramones are nothing if not legendary. Waking up the neighbors and setting the U.S. music scene on fire in the 1970s and through the '80s, The Ramones' story is tragic and raw, sentiments that could also describe the band's songwriter, bass player, and unsung genius, Dee Dee. A wild ride into the heart and soul of New York City, Poisoned Heart is Vera Ramones King's last testament to her former husband, who shocked the world when he died in 2002 of a drug overdose despite having been clean for years.

Dee Dee defined the punk-rock lifestyle. He was a rash, often violent heroin addict, and no one better understood his twisted mentality, or insanity, than his faithful wife Vera. But Vera—herself a less destructive Nancy to Dee Dee's Sid—also came to know the Dee Dee that music fans worldwide held near and dear: a generous, loving man with a soft spot for the downtrodden, who grew up in the tough streets of Queens, New York, and who never stopped working, writing, and performing. He often treated his wife like a Punk Rock Princess, and his greatest joy was the look on his fans' faces as he played them a song.

For true fans of The Ramones, those who remember the 1970s as a time of music innovation and inspired creativity, groupies, wannabes, and true music-lovers everywhere, Poisoned Heart is destined to become a literary—and rock—classic. For readers too young to have "felt" the electricity of the 1970s, this book will give you an insider's view of that era and will leave you wanting to hear even more of The Ramones.


Can be seen on the Palm Beach Post Things To Do and The Sun Sentinel's Arts and Entertainment Calendar.